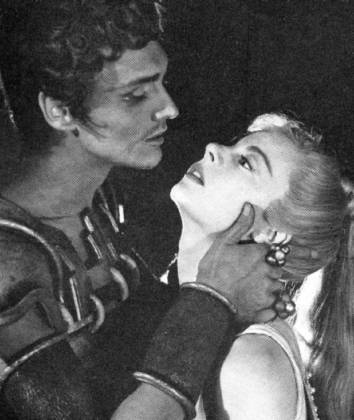 Pericles is often seen as the runt of Shakespeare's litter. Although apparently popular with contemporary audiences, for reasons unknown it was not deemed worthy of a reprint in the First Folio and exists only in a textually flawed Quarto version, to which editors have often been forced to interpolate material from other sources to try and arrive at a cohesive whole.

Perhaps one reason for its poor reputation is the fact that it is almost certainly beyond doubt a collaborative work. In 1709 Nicholas Rowe wrote that "there is good Reason to believe that the greatest part of that Play was not written by him; tho' it is own'd, some part of it certainly was, particularly the last Act". Of all the possible collaborators; the most convincing (indeed probably the only convincing) candidate is George Willkins whose own novel "The Painful Adventures of Pericles" was published in 1608 claims to have been based on the play. The evidence for collaboration is overwhelming; one does not have to be an experienced literary critic to notice the startling change between the poetic quality of the first two acts and the final three. Further research including patterns of rhyming (such as rhyming sung/come that are extremely rare in Shakespeare) and sentence structure (including the characteristic habit of beginning sentences or phrases with 'this' or 'by this') along with stylometric comparisons have come close to proving the theory that Wilikins was responsible for the first two acts and Shakespeare the final three. However, there is also stylistic evidence that the Gower choruses, the most prominent feature of the play, are almost all the work of Willkins (perhaps retouched by Shakespeare) which suggest that this play is a true collaboration and not just an example of Jacobean tag team writing.

George Willkins himself is a minor but fascinating character in the history of Early Modern theatre. By trade an inn-keeper, he was almost certainly also a pimp and bawd, regular in court for his violent activities towards women. His career as a writer however seems to have stemmed only a few brief years from 1606-1608 (which includes the collaboration with Shakespeare on Pericles). That he was associated with Shakespeare is undeniable; both are mentioned as witnesses in the Bellot V Mountjoy case of 1612. That somehow, such a low born character managed to get hold of three fifths of an unpublished play by Oxford (at least four years pushing up the daisies at this point); touch it up with his own material and then, for no reason, decide to get it published as being by an illiterate merchant from Stratford strains credibility beyond all reason.

How they may be, and yet in two,
As you will live, resolve it you.

It's not immortal, is it?

You mean Edward De Vere was not Shakespeare but actually.........George Willkins?